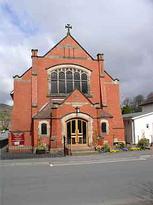 Church Stretton Methodist Church was built in 1906 following the purchase of land from the Stretton Land Company in 1905 for the sum of £60. Plans were drawn up for a church, school room and manse in Ruabon brick and in an architectural style popular throughout the Methodist Connection. The church was to have a central door with a porch leading to two internal side doors. At the far end, a central raised pulpit and communion area was planned and behind that the vestry, above which was a gallery to house the organ. Heating was to be from a coal boiler in the basement supplying hot water to radiators. Lighting was to be by gas. The architect was Mr W Scott-Deakin of Shrewsbury. The cost of the church was £1,000 but because of financial difficulties the schoolroom and manse were not built then.
The foundation stone was laid on 16th April 1906 and just four months later the church was opened on Monday 6th August 1906. It was noted in the Stretton Advertiser report of the opening that the pitch pine floor had not yet been laid (so presumably there were no pews.)

At the opening  Mr W Pace who had initiated the purchase of the land, stated “Primitive Methodists had not built the place in any spirit of opposition to other churches   …. their business was not to oppose but to co-operate.”
The manse was built in 1922/3 for the sum of £1,239.1s.  It was called Bourne House in memory of Hugh Bourne, the founder of Primitive Methodism. In 1998 the house was modernised and enlarged at a further cost of £70,000.
Due to a rapidly expanding Sunday School the church hall was built in 1956 for the sum of £2,860 to provide seating for 100, a kitchen and cloakrooms. It was extended in 1993 to provide a link into the back of the church with a  larger kitchen and disabled toilet facilities.

In time for the centenary of the church the interior was remodelled in 2006,  the pews and fixed pulpit removed, vestry door repositioned and a worship platform installed, complete with disabled access. The communion rail, pulpit and communion table can be easily removed and the comfortable chairs reconfigured, thus making the church multi-purpose. The excellent acoustics make it a perfect venue for concerts and lectures. The solid oak doors were replaced by glazed entrance doors and the arched window to the back of the vestibule replaced with glass doors, etched with a view of Carding Mill Valley. This glazed entrance gives the building  a more modern and welcoming appearance.

Down the centre is a picture of Jesus, with a triple halo incorporating symbols of the cross and of the Spirit. Below is a fruiting tree. Parables of the Sower and Good Samaritan are illustrated, along with pictures of St. Christopher and St. Francis.

In March 1907 the church purchased a “Malcolm” reed organ for the sum of £11.15s, possibly similar to the one shown in this picture.

In 1934 the trustees were offered a better organ for £474 but it was another seven years before a replacement was considered again. In 1941 there was the opportunity to acquire from Jacob Street Mission, Accrington, a two manual pipe organ built around 1860 by Messers Drivers of Burnley, Lancashire. It was installed in the gallery behind the pulpit. The same organ, in excellent condition is still in use today though in 1960 it was moved from the gallery to its present position by J Oakes & Son of Meir Heath, Stoke on Trent. It was completely overhauled and a new pedal board was converted to pneumatic action. 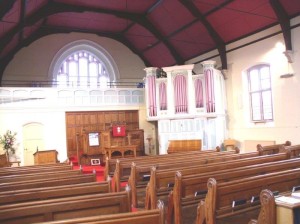 The Drivers organ of 1860 showing the original layout of the church, complete with pews and central pulpit

These notes on the history of the church are taken from Church Stretton Methodist Church Centenary booklet, compiled by Colin Powney with additional material by Ruth & Ward Davies.